Having suffered in silence since the tragic death of their young daughter, Lola and Duncan Drummond's last chance to rediscover their love for one another lies in an anniversary holiday to the gorgeous Napa Valley.Unable to talk about what happened, Duncan reaches out to his wife the only way he knows how - he buys her a derelict house, the restoration of which might just restore their relationship. As Lola works on the house she begins to realise the liberating power of letting go. But just as she begins to open up, Duncan's life begins to fall apart.Colette Dartford's debut novel, Learning to Speak American, explores whether a parent can ever truly move on from the death of a child. And, after all the heartbreak, whether Lola and Duncan can learn to love again. 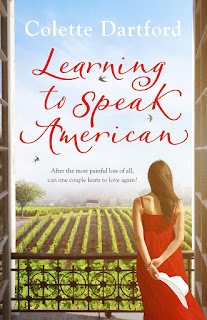 This is not my normal genre and I had some reservations when I was given an ARC in exchange for an honest review. However, I need not have been worried.It is an incredibly emotional book, dealing with the aftermath of the death of a child. It follows the parents as they try to make sense of the world, their relationship and themselves.Duncan is the fixer - trying to make his wife's life better as he tries to deal with his guilt. Lola is badly damaged by the death but starts to come alive and recover in California's Napa Valley as she fixes an old house they buy.There are many twists and turns before the end, none of which I will give away! But I enjoyed it and it certainly made me think - a lot!