Review of The Legend of the Gypsy Hawk by Sally Malcolm

Come then, and I’ll tell you the tale of the Gypsy Hawk and her wily captain – the infamous Zachary Hazard …’
To Amelia Dauphin, freedom is her most prized possession and she will stop at nothing to keep it. Daughter of a Pirate King and the youngest captain in her father’s fleet, she lives on the island of Ile Sainte Anne, where pirates roam free and liberty reigns. Zachary Hazard, captain of the Gypsy Hawk, hasn’t been seen on Ile Sainte Anne for six years but his reputation precedes him. To Zach, liberty is the open water and he has little time for the land-bound pirate island. But when he hears that Amelia’s people could be in danger, he has no choice but to return. And what begins then is a desperate fight for freedom and a legend in the making … A swashbuckling pirate adventure. Pirates of the Caribbean for adults with a sizzling romance at the heart!


Previously published by the author as Beyond the Far Horizon. Revised, edited and published by Choc Lit February 2015. 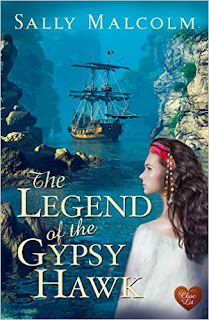 I took myself out of my comfort zone to read this - I don't normally read historical novels - too much Jean Plaidy in the 70's! But I'm very glad I did!

It is an absolute whirlwind through piracy in the 18th Century. There is a hot romance, a stinking London, piracy and the gutsiest heroine ever!

I thought Amelia was wonderful - way ahead of her times in women's equality, and her sense of fairness and equality for all men as well. She lives on island which is a haven for those do not fit in elsewhere - and her father declares everyone to be equal. (Although he lives in castle, so some were more equal than others, as was pointed out! T'was ever thus!)

The rescue had me so hooked, I read way into the night to finish it! I loved the way Sally used her skills in descriptions. I felt as if I was in a stinking hold, a freezing countryside, a warm island.

Absolutely loved it and I will definitely read the next one in the series when it appears. Hopefully it will tell us more about Luc!

Amazon UK
Amazon US
Posted by Unknown at 13:05