Bear with me - this is my first ever cover reveal!!  And I'm very excited about it!

As you know, I am a Choc Lit Star and it is my absolute pleasure to reveal the cover for Christina Courtenay's new book, The Velvet Cloak of Midnight (gorgeous title!). The book is sue out on Amazon on 7th October 2016. 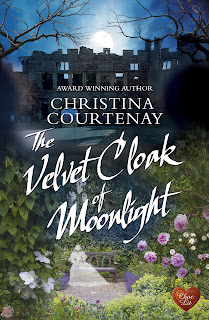 And for your further edification - here is the blurb:

“As the velvet cloak of moonlight settled over the ruined towers of Raglan Castle, the shadows beneath them stirred …”When newly widowed Tess visits Raglan Castle, an extraordinary hallucination transports her to a past that existed long before her own – to seventeenth-century Wales and to a castle on the brink of a siege.Even when Tess leaves Raglan to return to Merrick Court, her husband’s home, the strangeness continues as her life becomes increasingly intertwined with her dreams and visions. And when the new owner of the estate arrives - New Zealander Josh Owens - the parallels become even more obvious. It's time to confront the past head-on.But perhaps the voices from the past aren’t just trying to tell their own story, maybe they’re also giving a warning …

And last, but definitely not least, a short biography of Christina:

Christina lives in Hereford and is married with two children. Although born in England she has a Swedish mother and was brought up in Sweden. In her teens, the family moved to Japan where she had the opportunity to travel extensively in the Far East.
Christina’s debut Trade Winds was shortlisted for the 2011 Romantic Novelists’ Association’s Pure Passion Award for Best Historical Fiction. The Scarlet Kimono won the 2011 Big Red Reads Best Historical Fiction Award. Highland Storms (in 2012) and The Gilded Fan (in 2014) won the Best Historical Romantic Novel of the year award and The Silent Touch of Shadows won the 2012 Best Historical Read Award from the Festival of Romance. The Velvet Cloak of Moonlight is Christina’s eleventh full-length novel with Choc Lit.
Follow Christina on Twitter: @PiaCCourtenay
Visit her website: www.christinacourtenay.com

The Velvet Cloak of Moonlight is published by Choc Lit and is now available to pre-order! The paperback will be out on 7th October 2016.
Amazon UK/Amazon US/ Amazon CA