So excited to reveal the cover of Linn B Halton's new book, A Little Luck, A Lot of Fate!

Isn't it gorgeous? Can't wait to read it!

It's designed by the wonderful Berni Stevens - such a talented lady! 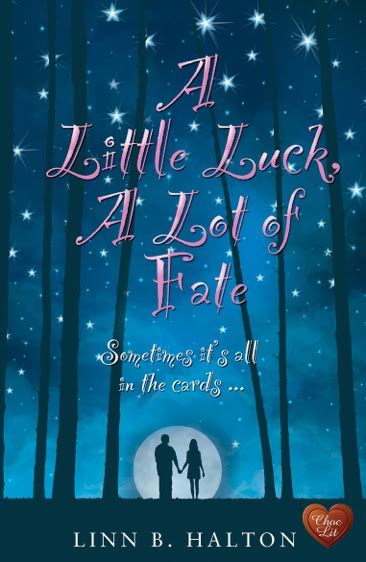 When destiny calls, you need to pick up …

On the surface, Kristi Danielson has it all. She’s lifestyle coach to the rich and famous, has a bestselling book to her name and is described by her fans as “the veritable Queen of how to lead a fulfilling life”.

But the harsh truth is that Kristi has never practiced what she preaches. Her home life is a mess, her relationship with artist boyfriend, Tom, not much better – and now she has to redeem herself before all is lost.

At her wit’s end, Kristi is driven to seek out the help of Patrick Blakeslee, a tarot card reader and psychic medium, in an attempt to make sense of the mounting panic she’s feeling.

But Patrick’s visits have an unexpected effect on Kristi, leaving her with more questions than answers – and a life-changing decision to make.

A Little Luck, A Lot of Fate is published by Choc Lit and is now available to pre-order on iBooks! It will be officially released on 25th October 2016.
Posted by Unknown at 09:25