Review of After She's Gone by Sheryl Browne - Five **

He’s killed your child and kidnapped your wife. What would YOU do?
There’s evil and then there’s Patrick Sullivan. A drug dealer, pimp and murderer, there are no depths to which Patrick would not sink, and Detective Inspector Matthew Adams has found this out in the most devastating way imaginable.
When Patrick’s brother is shot dead in a drug bust gone wrong, the bitter battle between the two men intensifies, and Matthew finds it increasingly difficult to hold the moral high ground. All he wants is to make the pimping scum suffer the way he did … the way Lily did.But being at war with such a depraved individual means that it’s not just Matthew who’s in danger. Patrick has taken a lot from Matthew, but he hasn’t taken everything – and now he wants everything. 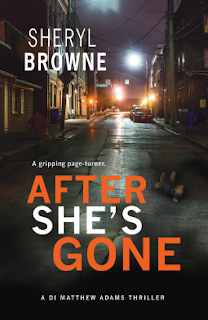 Oh boy!! I'm exhausted - stayed awake until 2am so I could finish this book - what a ride!You are thrust into the action from the first paragraph and it just gets faster and faster! Its the story of a cop versus a criminal and the action follows their war or words and actions. What makes it different is that you read the story from the aspect of different characters at different times. Which makes for a fascinating insight into the human psyche.The ending is so tense, I was glad I was in bed - I was exhausted!Absolutely loved it as I do all books by Sheryl.I received an ARC from Choc Lit & NetGalley in exchange for an honest review.