Review of The Girl in the Photograph by Kirsty Ferry - Five **

What if the past was trying to teach you a lesson?Staying alone in the shadow of an abandoned manor house in Yorkshire would be madness to some, but art enthusiast Lissy de Luca can’t wait. Lissy has her reasons for seeking isolation, and she wants to study the Staithes Group – an artists’ commune active at the turn of the twentieth century.
Lissy is fascinated by the imposing Sea Scarr Hall – but the deeper she delves, the stranger things get. A lonely figure patrols the cove at night, whilst a hidden painting leads to a chilling realisation. And then there’s the photograph of the girl; so beautiful she could be a mermaid … and so familiar.
As Lissy further immerses herself, she comes to an eerie conclusion: The occupants of Sea Scarr Hall are long gone, but they have a message for her – and they’re going to make sure she gets it.Book 3 in The Rossetti Mysteries, Book 1 – Some Veil Did Fall. Book 2 – The Girl in the Painting 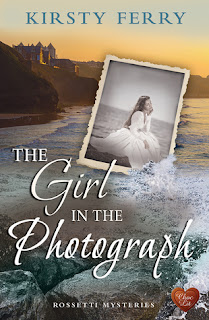 Kirsty Ferry just goes from strength to strength! This book was fascinating from two points of view. The interweaving time slip story was really well crafted and the research Kirsty has done on the early photographers and artists' groups was really interesting. In fact there was a BBC4 programme about early photography and Kirsty and kindled an interest so I watched it and learned even more!The intertwined love stories are beautifully written, particularly the 1905 one. I'm not going to say too much except to say that Lorelei was a fabulous character and I got really worried about her "happy ever after". The settings in Whitby and Cornwall were brought to life and I could clearly see the beautiful scenery in my mind.As ever, Choc Lit has another winner - how do they do it?I was given an ARC by NetGalley in exchange for an honest review.