Review of The A-Z of Everything by Debbie Johnson - Five**


P is for Paris where it all began. J is for Jealousy where it all came undone. But the most important letter is F. F is for Forgiveness, the hardest of all.
Sisters Poppy and Rose used to be as close as two sisters could be, but it’s been over a decade since they last spoke. Until they both receive a call that tells them their mother has gone – without ever having the chance to see her daughters reunited.
Andrea, though, wasn’t the kind of woman to let a little thing like death stand in the way of her plans. Knowing her daughters better than they know themselves, she has left behind one very special last gift – the A-Z of Everything. 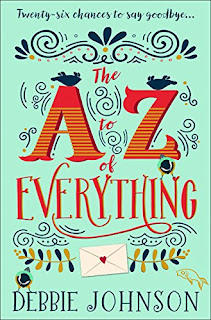 Review:
This is the most wonderful book. So emotional and affirming. As many of you know, I am a great fan of Rowan Coleman, and Debbie has similarly dug deep into the psyches of her characters, particularly Rose and Poppy, to bring us a glorious book about families and forgiveness.
The letters/videos/tapes from Andrea are so powerful, I cried buckets. Actually I cried buckets all the way through - but they were good tears. Tissues are definitely needed for this one!
I've always enjoyed Debbie's books, but this one is on a whole new level. It must have been torture to write and I'm definitely giving her a standing ovation!
I received an ARC in exchange for an honest review.