Review of The House on Cold Hill by Peter James - Five *


The House on Cold Hill is a chilling and suspenseful ghost story from the multi-million copy bestselling author of Dead Simple, Peter James.


Moving from the heart of Brighton and Hove to the Sussex countryside is a big undertaking for Ollie and Caro Harcourt and their twelve-year-old daughter Jade. But when they view Cold Hill House - a huge, dilapidated Georgian mansion - Ollie is filled with excitement. Despite the financial strain of the move, he has dreamed of living in the country since he was a child, and he sees Cold Hill House as a paradise for his animal-loving daughter, the perfect base for his web-design business and a terrific long-term investment. Caro is less certain, and Jade is grumpy about being separated from her friends.


Within days of moving in, it becomes apparent that the Harcourt family aren't the only residents of the house. A friend of Jade's is the first to see the spectral woman, standing behind her as the girls talk on FaceTime. Then there are more sightings, as well as increasingly disturbing occurrences in the house. As the haunting becomes more malevolent and the house itself begins to turn on the Harcourts, the terrified family discover Cold Hill House's dark history, and the horrible truth of what it could mean for them . . . 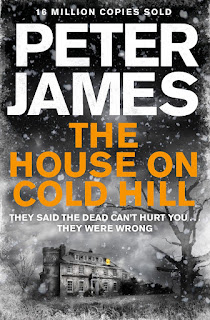 I've read some of Peter's Roy Grace series and really enjoyed them. But this is a new departure.
It's a modern ghost story and good ones are few and far between these days! But this is excellent!
I'm not into gore and extreme horror any more - too much in real life! But this is a very gentle story - and he strikes the right balance between the supernatural, suspense and a touch of horror. The atmosphere becomes darker as the book progresses and I was on the edge of my seat and glad I wasn't alone! I won't go into much detail here - it's better if you go into it with an open mind.....
My favourite ghost/psychological thriller has always been Turn of the Screw by Henry James, but Peter James is right up there too! (Must be something to do with the name!)
I was given an ARC from NetGalley in exchange for an honest review.