Review of See How They Run by Tom Bale - Five **

How far would you go to save your family?

In the dead of night, new parents Alice and Harry French are plunged into their worst nightmare when they wake to find masked men in their bedroom. Men ruthless enough to threaten their baby daughter, Evie. This is no burglary gone wrong. The intruders know who they’re looking for – a man called Edward Renshaw. And they are prepared to kill to get to him. When the men leave empty handed, little do Alice and Harry realise that their nightmare is just beginning. Is it a case of mistaken identity? Who is Renshaw? And what is he hiding? One thing is clear – they already know too much. As Alice and Harry are separated in the run for their lives, there is no time to breathe in their fight to be reunited. And with their attackers closing in, there is only one choice: STAY ALIVE. OR DON’T. Terrifying, unputdownable and full of twists and turns, this stunning thriller will have you on the edge of your seat right to the very last page. 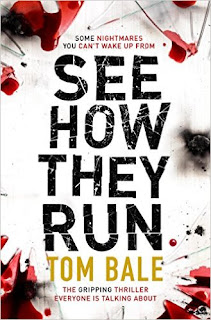 I'm not a major thriller fan, but had heard everyone raving about this book, so thought I'd give it a go.Have you ever read a book where you were too scared to turn the page?? I did once with Turn of the Screw - but I was 13 and alone in a new house. Now I can safely say I have had that experience twice. See How They Run is so tense, it became difficult to breathe at times, never mind manage to turn the page!It starts with what appears to be a terrifying case of mistaken identity. Harry & Alice breathe a sigh of relief when it is over and they are left in peace with their tiny daughter, Evie. But, as Tom so succinctly puts it: this was only the beginning.Throughout the book you have no idea who Harry and Alice can trust - and, indeed, if they can trust themselves and each other. An absolute masterpiece of a thriller!Thank you to NetGalley and Bookouture for the ARC in return for an honest review.