Review of The Summer Escape by Lily Graham - Four **

Amongst the beautiful olive groves and sea-front tavernas, summer has arrived on the sun-drenched island of Crete.
After losing the love of her life, Ria’s life has been on hold. So when her boss becomes completely unbearable she makes the snap decision to run away to the Greek island of Crete, armed only with her passport.
When Ria finds herself working for eccentric novelist Caroline, she meets handsome vineyard owner Tom. He’s charming, mysterious and Ria starts to wonder if it’s not just the beautiful Greek island that she’s falling for.
But as Ria gets to know Tom better, she uncovers a tangled web of secrets. What is he hiding? Ria has some secrets of her own. Can she open up to Tom and learn to live again?This summer, escape to the sun with this charming and emotional story about starting over and grabbing happiness with both hands. 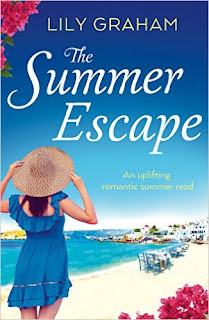 Am loving all these summery reads at the moment! Lily's book is literally an escape to Crete and the descriptions had me looking up holidays there!Ria is half greek, and after a particularly stressful day brought about by her unsympathetic boss, she jumps on a plane to Crete. The book follows her story as she gradually unwinds, finds a job and meets the locals - both English and Greek.I loved the story and mystery surrounding the vineyard and Tom's cautious advances. Caroline was a great character and their conversations were very funny! The food was so well described throughout the book, as were the smells of the herbs and flowers growing in Crete. I could almost taste and smell them myself!An all round beautiful summer read - and if you can read it on a Greek beach, so much the better!I received an ARC in exchange for an honest review.