Blue skies, new love, and a glass of Bordeaux . . . what could possibly go wrong? When Emmy Jamieson leaves her life behind and moves to La Cour des Roses, a gorgeous guesthouse amidst vineyards in France, everything is resting on her success as the new guesthouse manager. Looming in the calendar is the biggest booking ever, when the entire eccentric, demanding Thomson family will descend for a golden wedding anniversary. With airbeds on the floor and caravans in the garden, La Cour des Roses will be bursting at the seams. Emmy knows she’s up to the challenge, especially with the support of the gorgeous Alain, the half-French, half-English, caramel-eyed accountant. But she hadn’t counted on a naked, sleepwalking travel blogger, or the return of owner Rupert’s venomous ex-wife Gloria. Gloria has a few things to say about Emmy’s new role, Rupert’s finances, and the unsuspecting Alain, which send everybody reeling. Just when Emmy can see a future for herself of endless sunshine, true love and laughter, are her dreams about to be ripped at the seams? Fans of Jenny Colgan, Lucy Diamond and Nick Alexander will want to join Emmy for a glass of wine as the sun sets on the terrace at La Cour des Roses. 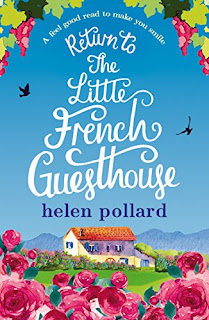 What a fabulous sequel! I fell deeply in love with Les Cours des Roses in the first book and was so happy when the sequel arrived so quickly! It meant I remembered all the characters and what happened in the first book.
You can read it as a standalone but it is so much better if you read them in order!

I started reading it in a hospital waiting room, waiting for a blood test. I think the other patients thought I'd lost the plot, I was giggling so much! It is a warm, happy and funny book.

Emmy is back to stay and manage the guesthouse that Rupert owns, after her boyfriend and his wife ran off together. There is a possible new love interest in Alain, the sexy accountant. And all the locals are there in force - especially Mme Dupont - one of my favourite characters!

There are a couple of unexpected twists this time - which add suspense and extra interest to the characters.

Loved this one!! Can we have another for Ellie & Rupert??