Welcome to the lovely Liz Harris!! Today is my turn on the blog tour for the wonderful new paperback "The Lost Girl". And this time we get to find out more about Liz and what makes her tick :)

Review of The Lost Girl by Liz Harris - Five **

What if you were trapped between two cultures?
Life is tough in 1870s Wyoming. But it’s tougher still when you’re a girl who looks Chinese but speaks like an American.
Orphaned as a baby and taken in by an American family, Charity Walker knows this only too well. The mounting tensions between the new Chinese immigrants and the locals in the mining town of Carter see her shunned by both communities.
When Charity’s one friend, Joe, leaves town, she finds herself isolated. However, in his absence, a new friendship with the only other Chinese girl in Carter makes her feel like she finally belongs somewhere.
But, for a lost girl like Charity, finding a place to call home was never going to be that easy … 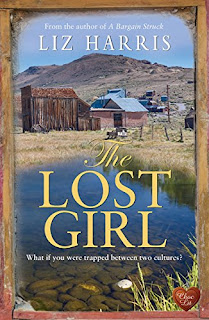 Wow! This book took me all over the place emotionally! Liz describes Wyoming post gold rush so well, I felt as if I was there! And her sensitive handling of the race problems between the white americans and the chinese was remarkable!

I felt so very sorry for Charity - she was Chinese by birth but had been brought up as an American and consequently did not fit in either group. The day she started school had me in tears.

And now for the promised info about the book and Liz's ideas.....

I’m frequently asked where I get my ideas from, and also what comes first – the story or the characters. Ideas come from many different places – from overheard conversations, lines of poetry, real life situations, the media, newspaper and magazine articles and so on. There’s no one answer: the inspiration for each novel is different. As for which comes first, the story or the characters, I find it equally hard to say as they so often grow together, both of them developing from the location.

That makes the location in which the novel is set, extremely important.

I doubt that there’s anyone reading this who hasn’t seen Location, Location, Location, a popular property programme in which two presenters help people to find the home of their dreams, the premise for the TV programme being that when you’re considering buying a house, you look first at the location.

I think that deciding upon the location is a pretty good place to start when you’re writing a book, too. After all, the location doesn’t just have to be right for the story; ideally it has to contribute to the story, and to do that, it must offer something meaty to the author.

My location for The Lost Girl is Wyoming in the 1870s and 1880s. It’s the third time I’ve set a novel in the American West, the most romantic of settings, but the first time I’ve located a book in the southwest of Wyoming. When I was researching Wyoming’s fascinating history in order to find that ‘something meaty’, I happened upon the tension that grew between the Chinese and the white miners, and I knew in that moment that I’d found the time and place for a potentially gripping story line, and a moving one.

The central family in The Lost Girl lives in Carter Town, a fictional mining town in the heart of the southwest, an arid area, rich in coal. Although fictional, Carter Town is based on a real railroad mining town and depicts the events that took place in that town in the early 1880s.

The more I read about the tension between the two communities, Chinese and white, the more I thought about identity. Suppose you looked 100% Chinese in your face, but had an American accent, wore American clothes, behaved with the openness of an American girl - what would you be, I wondered: American or Chinese? And from that moment on, my heroine, Charity, was born.

But how to get Charity into Carter Town, a town which at the time of her birth, was an all-white mining town, I mused. Obviously she’d have to be found by someone, I realised, and that someone gave rise to my hero, Joe Walker.

From that moment on, The Lost Girl started to take shape on my page. Seven-year-old Joe rescued an orphaned baby girl, and pleaded with his family for them to keep her. They reluctantly agreed, thinking that the baby girl could help Joe’s mother with the household chores when she was older. And thus my story began.

The Lost Girl is a story that grew from the location in which it was set, a story which I was determined would be true to the period and to the characters who were slowly evolving in my mind, a story which would engage your emotions and make you keep on wanting to turn the page.

I hope you agree with me, dear readers, that it did just this.

Thank you very much for inviting me to be a guest on your blog today; I’ve thoroughly enjoyed my visit to you.

The Lost Girl is now available to buy as paperback. Click here for purchasing options:

And now a short biography and some links where you can find out more about the lovely Liz!

Liz was born in London and now lives in South Oxfordshire with her husband. After graduating from university with a Law degree, she moved to California where she led a varied life, trying her hand at everything from cocktail waitressing on Sunset Strip to working as secretary to the CEO of a large Japanese trading company, not to mention a stint as ‘resident starlet’ at MGM. On returning to England, Liz completed a degree in English and taught for a number of years before developing her writing career.