A little treat from the previously reviewed 5** House of Secrets by Lynda Stacey from Choc Lit.

We have a guest post from the lovely Lynda today and she's here answering questions about the book!

And here she is answering some questions for our enjoyment!

On the 4th July my novel House of Secrets was turned into a paperback and I couldn’t have been prouder at the moment I got to take it back to where it all began, the beautiful Wrea Head Hall hotel in Scarborough. 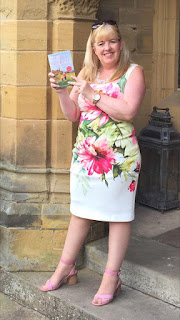 It was at this time, I got to look back at how I created Bandit, the hero of House of Secrets.

I’ve often been asked where the name for my hero came from.

Well, I’ll try and explain. Christopher Lawless, the hero of House of Secrets is an ex-marine, and like all marines I wanted to give him a name that gave credit to his profession, and in actual fact the nickname Bandit, came first and his ‘real’ name came after. So, his surname is LAWLESS and a lawless man is a Bandit… hope that explains it.

Bandit is obviously gorgeous but has just an edge of vulnerability that quickly shows in his personality. He suffers with post traumatic syndrome after his time working in Afghanistan where he saw both his girlfriend and his team blown up by a roadside bomb. He’s been discharged from the marines and has gone back to live in his childhood home, the gatehouse at Wrea Head Hall. Here, he has taken the job of game keeper, and does all the general maintenance around the hall. It’s a job he loves, purely because it means he gets to spend a lot of time alone, with nature.

When we first meet Bandit, he’s getting through each day the best he can. He’s a little unkempt. His hair is longer than it should be and he rarely shaves. But, we see a very gentle, caring side to him, that comes over as being a little more than overprotective, especially when he meets Maddie and her three-year-old daughter Poppy. What makes a good hero?
And of course this is only my opinion.
A good hero is hard to find. I often read books where the hero isn’t that appealing (to me), they are often flat and without much of a personality, which is why I like to give my heroes a history. I feel that they need depth of character and a big personality. They don’t necessarily have to be gorgeous, but of course it helps. I feel that it’s more important for them to be kind, respectful, passionate and sensitive. I also feel that the hero needs to be interesting, a little flawed. He needs to feel emotion, even if sometimes that’s anger or hatred, especially towards someone who is trying to hurt the people he loves. All of this helps the reader identify with him, they take the journey with him as he overcomes those flaws, and what’s more they begin to root for him to achieve and succeed.

Who would be the perfect Bandit? 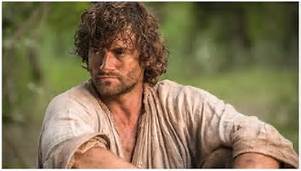 I think someone like Stuart Martin who played Silas in Jamestown. He’s a little vulnerable, a little rough around the edges, yet still gorgeous. Yes, Stuart Martin would definitely be my Bandit.

An extract of the novel from Bandit’s point of view …

‘Damn woman,’ Bandit cursed as he glanced up at the hotel and saw Madeleine watching him from the window. Raising the axe high above his head, he brought it down with a satisfying thud, making the log split in two and fall to the ground. He scooped up the logs that he’d previously cut and threw them into the wheelbarrow that stood by his side. It was still early autumn and without the glow of embers in the open fires, the house could easily turn cool at night. Besides, the reception rooms always looked much nicer with the logs alight, the guests preferred it and it was his job to ensure that there was enough dry wood to keep each of the three fires going right through the winter. But he knew he had to be ahead of his game, this wood would need to be stacked and dried out for at least six months before it would be ready to burn.
He saw the back door open and watched as Morris Pocklington emerged.
‘Look, I’m really sorry about last night. I didn’t know that Madeleine was your daughter,’ Bandit said, pre-empting the conversation that he guessed was about to happen.
‘She’s pretty pissed at you,’ Morris replied with a laugh. ‘I’m not sure I’d want to get on the wrong side of her.’
‘Shouldn’t be going round pretending to be a burglar then, should she?’ Bandit fired back as he picked up another log and brought the axe down to split it. There was no way he could have known who she was. He hadn’t even known that the boss had a daughter, so he couldn’t be blamed for not knowing who she was when he’d seen her creeping around like a hunting tiger, looking for its next meal. But tigress she was not. He’d seen the way she’d looked up at him like a frightened doe in the darkness. Her eyes wide open with fear. She’d appeared vulnerable yet powerful, and timid yet fiery, all at once. She was so similar to the type of women he’d encountered in the marines. Women who could cut you down with words at ten paces, or shoot you from a distance and, to be honest, he wasn’t sure he wanted to encounter women like that again. Not after Karen.
‘You don’t like her?’ Morris asked as he stepped up on the log to perch on the fence and pushed his hands deep in his pockets.
Bandit bit his lip. ‘I barely know her.’
He thought of the deep musky perfume that she’d been wearing; its scent had annoyingly stayed with him through the night. She’d had a feisty personality, a spark about her that could have lit a campfire from a distance, yet he couldn’t work out what annoyed him the most; her high spirits, her feisty personality or the vulnerability that shone from within. None of them could possibly be a good thing.
‘Afghanistan, it changed you, Bandit.’
It was true. Afghanistan had changed him. Karen had changed him. ‘I know.’
‘Do you want to talk about it yet?’
‘No, I don’t.’ The words were sharp, harsh and meant to stop the conversation. The very last thing he ever wanted to talk about was Afghanistan. Just the thought made his palms begin to sweat and he rubbed them down his jeans as he felt his whole body begin to tremble. He wanted to close his eyes, but couldn’t. On some nights there was no sleep at all, some nights he’d sleep for an hour or two, but then the nightmares would begin. Every sudden noise reminded him of the explosion, every beach reminded him of the desert and every woman reminded him of Karen. Everything that had happened played on his mind. One minute he’d been part of an elite group, the next he was flying home: inadequate, alone and uncertain of his future.

About House of Secrets:
A woman on the run, a broken man and a house with a shocking secret...
Madeleine Frost has to get away. Her partner Liam has become increasingly controlling to the point that Maddie fears for her safety, and that of her young daughter Poppy...
Desperation leads Maddie to the hotel owned by her estranged father – the extraordinarily beautiful Wrea Head Hall in Yorkshire. There, she meets Christopher 'Bandit' Lawless, an ex-marine and the gamekeeper of the hall, whose brusque manner conceals a painful past.
After discovering a diary belonging to a previous owner, Maddie and Bandit find themselves immersed in the history of the old house, uncovering its secrets, scandals, tragedies and, all the while, becoming closer.
But Liam still won't let go, he wants Maddie back, and when Liam wants something he gets it, no matter who he hurts...

House of Secrets is available as a paperback from all good stockists and also as an eBook on all platforms. For buying options, click here: www.choc-lit.com/dd-product/house-of-secrets/

About the author:
Lynda, is a wife, step-mother and grandmother, she grew up in the mining village of Bentley, Doncaster, in South Yorkshire.
She is currently the Sales Director of a stationery, office supplies and office furniture company in Doncaster, where she has worked for the past 25 years. Prior to this she’d also been a nurse, a model, an emergency first response instructor and a PADI Scuba Diving Instructor … and yes, she was crazy enough to dive in the sea with sharks, without a cage. Following a car accident in 2008, Lynda was left with limited mobility in her right arm. Unable to dive or teach anymore, she turned to her love of writing, a hobby she’d followed avidly since being a teenager.
Her own life story, along with varied career choices helps Lynda to create stories of romantic suspense, with challenging and unpredictable plots, along with (as in all romances) very happy endings.
Lynda joined the Romantic Novelist Association in 2014 under the umbrella of the New Writers Scheme and in 2015, her debut novel House of Secrets won the Choc Lit & Whole Story Audiobooks Search for a Star competition.
She lives in a small rural hamlet near Doncaster, with her ‘hero at home husband’, Haydn, whom she’s been happily married to for over 20 years.