Review of Too Damn Nice by Kathryn Freeman - 5** Out today!

Do nice guys stand a chance? Lizzie Donavue went from being the sister of his best friend to the girl Nick Templeton most wants to kiss. On her birthday, he finally summons up the courage to make his move. But it looks like Nick’s missed his chance when he discovers that Lizzie has been offered a modelling contract, which will take her away to the glamorous fashion scenes of New York and Los Angeles.Nick is forced to watch from the sidelines as the gawky teenager he knew is transformed into Elizabeth Donavue: top model and ultimate English rose pin-up, forever caught in a whirlwind of celebrity parties with the next up-and-coming Hollywood bad boy by her side. But then Lizzie’s star-studded life comes crashing down around her, and a guy like Nick could be just what she needs. Will she take a chance on him? Or is he just too damn nice? 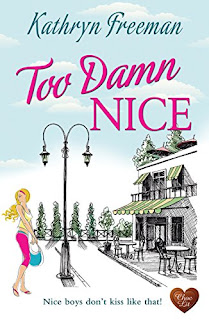 What a wonderful book! Do second chances happen? Is Lizzie beyond his reach? And, of course, is Nick "too damn nice"?

This is the fab tale of the damsel in distress being rescued by the knight on a white charger. But where that stops at happily ever after, this book goes into the intricacies and complications of  modern relationships and people.