The truth can hurt, and sometimes it leads to murder …
After becoming embroiled in a murder investigation, Nate Bastable and Ruby Fawcett have decided to opt for the quiet life. But crime has a habit of following them around.When her work dries up, Ruby finds herself accepting a job researching and writing about Diana Patrick-John, a colourful and enigmatic Cambridge academic. Simple enough. But then there’s the small fact that Diana was found dead in suspicious circumstances in her home – the very place where Ruby has now been invited to stay.As she begins to uncover Diana’s secret life, Ruby’s sleuthing instinct kicks in, leaving her open to danger and retribution. But can she rely on Nate to support her? Especially when his behaviour has become increasingly distant and strange, almost as though he had something to hide …From Death by Choc Lit – gripping edge of your seat reads. 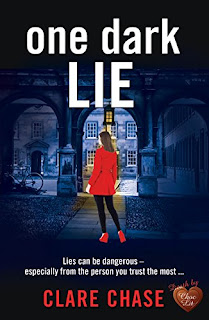 This is the 3rd book in the London & Cambridge Mysteries series. It follows on from A Stranger's House (which is also brilliant) but can be read as a standalone.

Ruby takes a job writing about Diana, a member of the Cambridge elite. Diana's brother asks her to do it and sets some very stringent guidelines. However, Ruby being Ruby, follows her nose into the mystery of Diana's suspicious death.

In the meantime, Nate is closing in on the gangster whom he suspects killed his sister - but he is still working out whether it was him or his sister that was the target.

I LOVE Clare's books! And this one was just as good as the others. She keeps you guessing right to the end and a couple of red herrings in this one really confused me - in a good way!

The characters are believable and I love Ruby's dogged determination. The plot is complicated enough to keep your interest all the way through and the flashes of humour certainly help to relieve the tension.

And now for something a little different......

I reviewed Little Girl Lost by Janet Gover a while ago when the Kindle edition was released. Well, the paperback is now out so I'm celebrating that with an extract focussing on one of the characters - Sarah Travers. 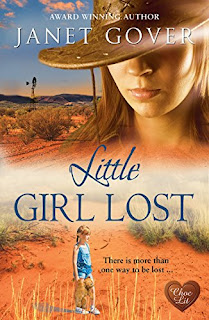 Meet a character: Little Girl Lost by Janet Gover
Janet Gover’s new Coorah Creek novel is now available to purchase in paperback. To celebrate we’ll be introducing you to characters from the book. Today on Annie’s Book Corner, you can ‘meet’ Sarah Travers.

Sarah is a shopkeeper’s daughter who grew up in Coorah Creek and she’s just returned home after finishing her college degree. There’s bad news waiting for her, and as she struggles with her father’s failing health, part of her longs for a simpler, happier time.

Sarah started sorting the contents of some half empty boxes, setting aside new stock to go on the shelves, and stacking the rest for later use. As she did, she noticed a small cardboard box pushed to the back of a high shelf. The sides of the box were battered and stained and very dusty. That box had not moved in a long time. Sarah stood on a wooden crate and reached to retrieve it. She smiled as she realised it was the box that had once contained her first pair of heeled shoes: some sandals she had been given for her twelfth birthday.
Deeply curious, she sat on the crate and placed the shoebox on her lap. Trying not to create a dust cloud, she opened it. Inside she found the sort of accumulated nearly-useful things most people put into small boxes and then forget. There was a key ring with a couple of keys, although Sarah had no idea what they might open. There were a couple of old pens, which would obviously no longer work. A pile of rubber bands had more or less melted together and lay on top of an envelope that was old and brittle and yellow and empty.
Sarah reached into the box and retrieved the keys. She’d show them to her father before she threw them away. Nothing else in the box looked like it was worth salvaging. She shuffled the contents around a little, and the corner of an old photo appeared underneath the envelope. She removed it and turned it to catch the light streaming through the storeroom window.
The colours had faded over the years, and the edges of the paper were curling, but the photograph clearly showed a girl of about ten sitting behind the wheel of a big prime mover. Her small hands gripped the big steering wheel tightly, but her feet were far too short to reach the pedals. She was grinning widely as she strained to see through the windscreen. Sitting beside her, his arm protectively around her shoulders was a handsome young man. His hair was long and dark and slightly wavy. He was smiling in a slightly bemused way.
Memories of that day came flooding back, bringing a smile to her face. She’d had a terrible crush on that driver. Pete, his name was. It was a moment of such excitement to be lifted up by him and placed gently in the driver’s seat of his truck. How far up she had felt. How very grown up. And how wonderful it had felt to have Pete’s arm around her. To have his approval. Her father had ducked back into the house and grabbed his cheap little camera to capture the moment. They had kept the photograph on a corkboard at the back of the shop for a while, before it got lost among the receipts and orders and notes. Strange that it had ended up here.
It would have been different for Pete, of course. To him it had no doubt been a little act of kindness to a lonely girl in an isolated store at a tiny truck stop on his road. She doubted that he would remember it now. She had forgotten all about it, until she saw the photo. Briefly she wondered where Pete was. Was he still driving this same route? Maybe he was the one who had stacked the boxes for her parents? If so, it just went to show that he was – if not a knight in shining armour – a good Samaritan at the very least. He was probably married now with a house full of kids. As for her; she had an education and a degree that could take her away from here. If she wanted to go. And right now, she didn’t. She couldn’t. She wouldn’t leave her father. If she did, she might never …
She caught herself. No. She’d promised her mother she wouldn’t say it. She wouldn’t even think the words.
There were no knights in shining armour, but a positive attitude could make all the difference to her father’s treatment. At least, that’s what people said. She hoped they were right.

Blurb:
When a little girl goes missing, an entire town comes together to find her ...
When Tia Walsh rides into the small town of Coorah Creek on a Harley-Davidson, Sergeant Max Delaney senses that everything about her spells trouble. But Tia's trouble is not all of her own making, and the dangerous past she tried to leave behind is hot on her heels.
Sarah Travers has returned home after three years of college to find that her parents have been keeping a devastating secret. Her childhood crush, Pete Rankin, is facing his own struggle with a harsh reality that will take him away from the girl and the life that he loves.
Tia, Max, Sarah and Pete are all trying to find their future, but when a little girl goes missing in the harsh outback, nothing else matters except finding her safe ...