Morning one and all!

Something a little different. I am reading a fab book at the moment called Aphrodite's Tears by Hannah Fielding.

If you're into Greek islands, romance and Greek Mythology, then this is the book for you! 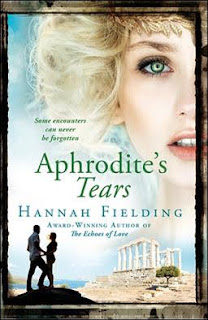 In Hannah Fielding’s latest novel a young archaeologist who travels to the remote island of Helios to investigate an ancient shipwreck, becomes caught in a web of dark obsession, mystery and seduction.

In ancient Greece, one of the twelve labours of Hercules was to bring back a golden apple from the Garden of Hesperides. To archaeologist Oriel Anderson, joining a team of Greek divers on the island of Helios seems like the golden apple of her dreams.

Yet the dream becomes a nightmare when she meets the devilish owner of the island, Damian Lekkas. In shocked recognition, she is flooded with the memory of a romantic night in a stranger’s arms, six summers ago. A very different man stands before her now, and Oriel senses that the sardonic Greek autocrat is hell-bent on playing a cat and mouse game with her.

As they cross swords and passions mount, Oriel is aware that malevolent eyes watch her from the shadows. Dark rumours are whispered about the Theodorakis family. What dangers lie in Helios: a bewitching land where ancient rituals are still enacted to appease the gods, young men risk their lives in the treacherous depths of the Ionian Sea, and the volatile earth can erupt at any moment?

Will Oriel find the hidden treasures she seeks? Or will Damian’s tragic past catch up with them, threatening to engulf them both?


It's not out until January, but here is a little video taster for you all!


https://www.youtube.com/embed/rYEE8SfQFVM
Posted by Unknown at 10:58 No comments: