Sometimes you need a little help.

Matt Carver was stuck on a Transatlantic cruise with his entire family. And while he loved them all, the two week trip was going to kill him. Especially since his well-meaning mother loved to meddle in his personal life. The only way he could keep the peace, and his sanity, was to produce a fake girlfriend. Good thing he had just the woman for the role: Beth Riley, an adventurous beauty who’d already rescued him once.


And sometimes you just want to run away.

Beth Riley needed an escape. Her normal drama-free life was swimming in scandal after her sister announced she was marrying Beth’s ex-boyfriend. In order to distance herself from the wedding fiasco, Beth fled the country. It was her chance to sort out her feelings and re-evaluate her love life. But the cruise wasn't the fun filled break she’d been expecting. Luckily Matt, with his harebrained plan, provided the perfect distraction. The whole ruse was supposed to be harmless, but things quickly turned intense when their made-up relationship and fake kisses produced undeniable heat. 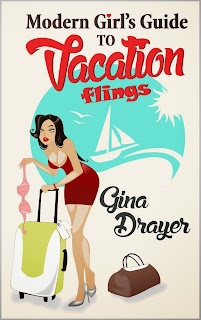 I enjoyed this book. It was fun, funny and had a good storyline. Beth is man-shy after her sister gets engaged to Beth's ex and the wedding is looming. Beth escapes onto a transatlantic cruise.

On the flight to the port, she meets Matt and they get on well. Once on board, she discovers Matt is there with his huge family. She agrees to pretend to be his girlfriend to keep his mother and sister-in-law's matchmaking at bay.

Of course emotions and feelings soon come into it and there is a lot of misunderstandings and making up (the sex is well written too). Gina describes shipboard life well and I enjoyed the cruise!

Her descriptions of sister-in law and her sister are brilliant - and so bitchy!! In fact all the characters are well drawn and really support Beth and Matt well.

I look forward to Simon's (Matt's work colleague) story in the next book.