Review of New York for Beginners by Susann Remke - Four *

Fashion blogger Zoe Schuhmacher adores her life in Berlin—until her longtime boyfriend unexpectedly dumps her for his “first love.”After the messy breakup, Zoe is determined to refocus on her career and to reinvent herself, starting with rule number one: no relationships and no romance. So when she’s offered a job in glamorous New York City, Zoe accepts at once, hoping to leave heartbreak behind and build a new life in America. But as she struggles to adapt to the city that never sleeps and its particular quirks and customs, Zoe wonders if she’s bitten off more than she can chew.

And after a steamy encounter with a gorgeous neighbor, Zoe has to make a decision: Will she keep her resolve and play it safe, or will she throw the rule book out the window and follow her heart? 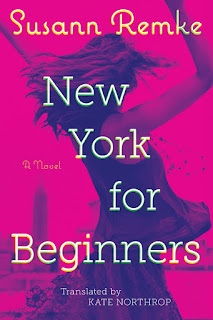 This was quite different from most books set in NYC. It's by a German author and has been translated very well into English. It means the reader sees New York through German eyes rather than the usual American/English eyes. I enjoyed the modern theme to the love story - Zoe is a digital media expert and good at her job. The ups and downs of her relationship with Tom were very authentic (and Tom's mother is a nightmare).I was stunned when the book ended on a cliffhanger. I was so not expecting that! I hope a sequel is in the pipeline because I need to know what happens!