A hilarious new romantic comedy for fans of Lindsey Kelk and Jane Costello from Anna Bell, the bestselling author of Don't Tell the Groom. Abi's barely left her bed since Joseph, the love of her life, dumped her, saying they were incompatible. When Joseph leaves a box of her possessions on her doorstep, she finds a bucket list of ten things she never knew he wanted to do. What better way to win him back than by completing the list, and proving they're a perfect match?But there's just one problem - or rather, ten. Abi's not exactly the outdoorsy type, and she's absolutely terrified of heights - not ideal for a list that includes climbing a mountain, cycling around the Isle of Wight and, last but not least, abseiling down the tallest building in town . . . Completing the list is going to need all Abi's courage - and a lot of help from her friends. But as she heals her broken heart one task at a time, the newly confident Abi might just have a surprise in store . . 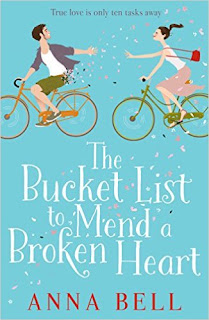 This was one fab book! Lovely twist to the usual bucket list book.I found Abi was a credible and interesting lead character. I admired the way she tackled the list, even if her reasons were a bit dubious! Her attempts at some of the things on the list were hilarious - particularly the windsurfing!Ben was a lovely bloke and couldn't have been more different from Joseph if he's tried! Loved the day in Paris - and the sensitive side to him.The best theme for me was the way everyone could see what was happening to Abi - except Abi! She was soooo stubborn!!Thoroughly enjoyed it and thanks for the ARC in exchange for an honest review.