All Riley Flynn wants is to meet someone who makes her happy. But attracting the right kind of man is not easy, and with her heart still hurting from her last break-up, Riley believes she’ll never find love again. A year ago, Sadie Stewart’s whole world was shattered when her husband, Ross, died. She has struggled to keep herself together for the sake of their young daughter, but with the anniversary of his death approaching, Sadie finds herself overwhelmed by grief. Sadie and Riley work at Chandlers shoe shop, in the charming town of Hedworth. But when Chandlers is threatened with closure, the friends are confronted with the loss of not only their jobs, but also their support network - the glue that holds them together when they are close to breaking. As they put together a plan to save their beloved shop, Sadie realises that she might just be learning to live again. Could it be that new beginnings are just round the corner? The campaign also finds Riley unexpectedly crossing paths with charming photographer, Ethan. Maybe her second chance at love is right under her feet … 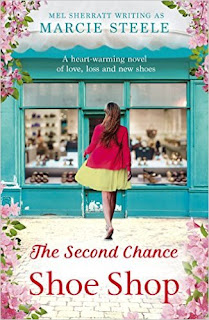 This was unexpectedly emotional. I know you shouldn't judge a book by its cover but I was expecting light, fluffy romance. Maybe if I'd read the title properly I would realised - but I kept waiting for second HAND shoes!As a consequence, once I'd realised my error, I was astonished at how deep this book can go with the characters, particularly Sadie. I found myself almost holding my breath whenever Suzanne appeared and wondering how Riley, who is kind, clever and funny, could miss obvious clues.The three main characters all have such different stories that my interest was held throughout. For me, the main theme was all about forgiveness and second chances - some worked, some didn't.Really enjoyed it and look forward to the next one out :)I received an ARC in exchange for an honest review.