Review of Escape to the Riviera by Jules Wake - Five **


**Lose yourself in the south of France this summer in this fabulously feel-good beach read!**
Carrie Hayes has a job she enjoys and a perfectly nice boyfriend. She’s sorted. Isn’t she?
But Carrie’s life wasn’t always like this. As a young,wild drama student, she married fellow actor, Richard Maddox, after a whirlwind romance. Life back then was full of possibilities, but when Hollywood beckoned Richard, Carrie was left behind.
Now an A-list superstar, Richard’s life couldn’t be more different to Carrie’s, so when their paths cross in glamorous St Tropez, she can’t help but wonder what might have been.
But with lovely, sensible Alan in tow, Carrie knows she needs to do the right thing. The only problem is, Carrie and Richard never quite got round to getting a divorce…
Lose yourself this summer on the French Riviera, the perfect read for fans of Lucy Diamond and Jane Costello. 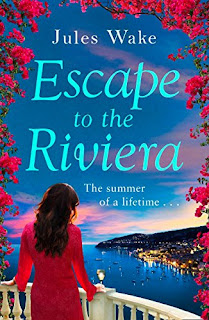 This is one amazing book. I've followed Jules' career from her first book and I can see her writing maturing and developing.It follows the story of Carrie, a teacher, and in a relationship with another teacher, Alan (great name by the way!) When Alan proposes, Carrie realises she has to sort out a divorce. But her husband is a world famous film actor now....She travels to the Riviera with her sister and niece, who are both wonderful characters too - Jade especially. There she manages to make contact with Richard and the story follows her attempt at obtaining his signature on the divorce papers. This is not as straightforward as she had hoped because Richard has a very different agenda!The descriptions of the landscape, the glamour, the glitz all make this a great read. Perfect for the beach!!I received an ARC in exchange for an honest review.