Review of Lovers and Liars by Nigel May - Four **

Welcome to the Velvet Hotel Barbados where money and sex go hand in hand with murder ....

When millionaire playboy Sheridan Rivers is found dead at his luxurious hotel on the paradise island of Barbados, there are several suspects in the frame…
Sutton: Sheridan’s long-suffering wife was permanently pushed aside for his younger lovers. Was it time for her to make a stand?
Kassidy: Sheridan’s assistant longs to be wealthy in her own right. Employed for her sexual and organisational skills, could she have had her eyes on a bigger prize?
Nikki: Sheridan’s oldest daughter has done something really bad that her dad has discovered. What price will she pay to keep his silence?
Heather: The apple of her father, Sheridan’s, eye. But she blames him for a terrible tragedy that turned her world upside down. Is the time ripe for revenge?
Four women, each with a cross to bear – all waiting for the perfect moment to get even...
This summer, pour yourself a glass of bubbly and escape with the elite to the golden beaches of Barbados for a sexy, scandalous romp that you won’t be able to put down. 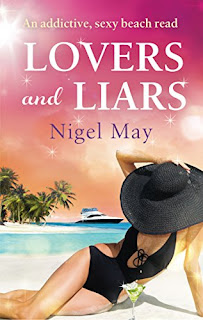 Oh well done Nigel! Sex, drugs & Rock 'n Roll, well a hot dj anyway! This is the perfect pool read, especially if you are the Caribbean or Crete!

This is very much a book about the women in the life of Sheridan Rivers - his wife, his daughters and his PA. But it is much more than that. It is about life in the fast lane, hiding one's true identity, having to live much of your life in secrecy. It's about loyalty, both family, relationship and business. And it is very much about what happens when you don't give a damn about anyone but yourself and your money. And I'm not just talking about Sheridan.

We learn Sheridan is murdered very early on, and in true Agatha Christie style, Nigel reveals all the players and their motives as the book progresses. You are then faced with one "victim" and any number who could have killed him! And you don't really blame any of them!

I loved Sutton and her family, their fierce loyalty and love was truly amazing in the face of the deceit and treachery surrounding them. Hatton, too, came from a poor background and had made good. I felt sorry for the deception he was forced to keep up.

Great book, unexpected ending and I'm so glad we have a worthy successor to the late, great Jackie Collins!