Blogtour review of We'll Always Have Paris by Sue Watson - A HUGE Five **!

Does first love deserve a second chance?
When she was almost seventeen, Rosie Draper locked eyes with a charismatic student called Peter during their first week at art college, changing the course of her life forever. Now, on the cusp of sixty-five and recently widowed, Rosie is slowly coming to terms with a new future. And after a chance encounter with Peter, forty-seven years later, they both begin to wonder 'what if' . . .
Told with warmth, wit and humour, We'll Always Have Paris is a charming, moving and uplifting novel about two people; the choices they make, the lives they lead and the love they share. 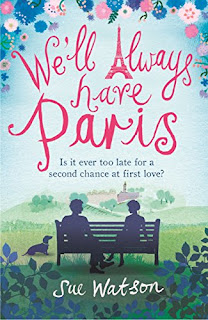 I cannot put into words how much I loved this book! Thank you Sue - for an older couple, for lost love refound, for mothers and daughters.....I am of an age with Rosie and had a love of my life as a student so I was at one with Rosie and her emotions. The depth of character in Rosie and Peter was simply stunning and so, so believable! Anna & Isobel added the conflict wonderfully and I could hear my mother in the late Margaret's words.People now think of the 60s and 70s as a time of liberation for youth and yes, it was. But we had all been brought up by parents who were young in the far more repressed 40s & 50s. And they were children of people born in the Victorian era! So whilst we were experimenting with sex, drugs and rock. & roll, we also carried the guilt and repression around with us. And in the 60s, certainly, the average girl was far more innocent and well-behaved than history implies.Thus Rosie's early conflicts really are true of the times - and her conflicts of today are very true as well.I loved the ending. I learned to scuba dive and did a tandem sky dive in my 50s - we are now far more liberated than ever - and Sue describes this perfectly!I received an ARC in exchange for an honest review. And I thought the book was nigh on perfect!