Review of Revenge is Sweet by Berni Stevens - Five **


But when Daniel, a fifteen-year-old fledgling vampire, unexpectedly turns up at Ellie’s and Will’s Highgate home, things start getting very strange – and more than a little scary.


Events take a devastating turn as a mystery troublemaker leaves behind a trail of carnage – and it soon becomes clear they will stop at nothing to get the Elder’s attention, even if it involves hurting the person he cherishes the most …


But when it comes to Ellie, Will Austen is the wrong vampire to mess with. 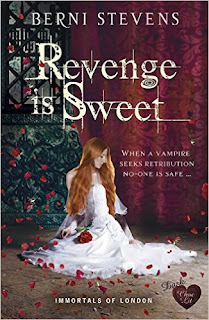 Wish I could give more than 5*! This was wonderful!

I hadn't read the first book in this series, so I read Dance Until Dawn first and then went straight into Revenge is Sweet. This book can be read as a stand alone, but it helps to read the first one to get a stronger sense of character. And, since that's a 5* read too, it's no great task!

This one is slightly darker (forgive the comment about a book about vampires!) and although, it features all the same vampires (and Stevie)' it is a completely new story. And a scary one!

Ellie is a very sympathetic vampire and retains a lot of her humanity. This is what makes the darker scenes so effective. We see them from the vampire AND human points of view. What is totally acceptable to the vampires would be abhorrent to a human.

There are lighter moments and sparring between Will and Ellie can be very funny at times. Luke is a wonderfully patient character and I love Roxy - she reminds me of Alice Cullen!

The ending is perfect and I so look forward to the next book in the series. Thank you, Berni, for a book about "real" vampires in a real setting. Loved it!