Review of Please Release Me by Rhoda Baxter - Five *

What if you could only watch as your bright future slipped away from you?
Sally Cummings has had it tougher than most but, if nothing else, it’s taught her to grab opportunity with both hands. And, when she stands looking into the eyes of her new husband Peter on her perfect wedding day, it seems her life is finally on the up. That is until the car crash that puts her in a coma and throws her entire future into question. In the following months, a small part of Sally’s consciousness begins to return, allowing her to listen in on the world around her – although she has no way to communicate. But Sally was never going to let a little thing like a coma get in the way of her happily ever after … 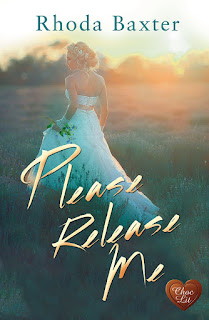 I trust Choc Lit so much that I didn't read the blurb and was startled by the unusual story. However, I did really enjoy it. It starts with a wedding and more or less ends with a funeral - very roughly! I'll say no more as I don't do spoilers!The three main characters, Sally, Grace and Peter are like chalk and cheese. Grace and Peter have far more in common but it is Sally who, being very strong-willed, runs the storyline. I felt very sorry for Glenda - Sally's family situation really helped to explain a lot. Grace was lovely - seeing her come alive and start living again was quite wonderful. Peter seemed to be a bit of an innocent to start with, but he actually has remarkable inner strength. Sally was.....well Sally! And I was not expecting her to do what she did at all! I couldn't have ever guessed the end - in fact I had it completely wrong!Sadly, a sequel would not be possible in this instance...or would it?