Review of Another Love by Amanda Prowse - Five *


In the early years, she was happy.
Romilly had worked hard for her stunning, modern house in one of Bristol's most fashionable suburbs. She adored her gorgeous, gap-toothed daughter and her kind and handsome husband. Sure, life was sometimes exhausting - but nothing that a large glass of wine at the end of the day couldn't fix.
But then, as deep-buried insecurities surfaced, everything started to unravel. A glass of wine became a bottle; one bottle became two. Once, Romilly's family were everything to her. Now, after years of hiding the drinking, she must finally admit that she has found another love... 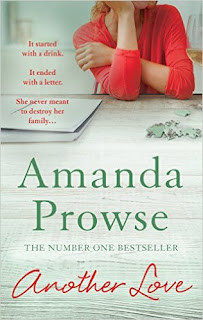 Where do I start? With poor Romilly, who goes to hell and back several times during the course of her life? Or with Celeste, who suffers from the fallout of her mother's illness? Or David, bewildered and lost in the face of his wife's addiction?

Having some knowledge of alcoholism in the family, I can say, without any qualification, that Amanda describes it accurately and, thank heavens, without pity.

The hopelessness of Romilly balances perfectly with the helplessness of her family. Romilly sinks to rock bottom in a gradual but inevitable increase of alcohol intake and decrease of feelings for anything but the bottle. At the back of her mind, she knows she doesn't want to do it, but the cravings are too strong.

David attempts to help to start with but, since she doesn't want to stop, he is powerless. The inevitable break up is harrowing and following Romilly after that is dreadful. It shows graphically how low an addiction can take you.

I loved the way the chapters alternated between Romilly's point of view and Celeste's. It really showed very clearly that it is a family illness. The addict affects others in a myriad of ways.

It's not an easy read, but it is a very positive book in many ways. Thank you Amanda - I loved it!