Review of Deadly Obsession by Nigel May - Four *

What would you do if you saw your husband killed right in front of you … identified his body … had him cremated … then six months later received a letter written by him two days ago? Amy Barrowman grew up on the wrong side of the tracks. So when she falls in love with millionaire Riley Hart and he asks her to marry him she can’t believe her luck. She has found true love and her happy ever after. Riley Hart is a Millionaire Man about Town. Men want to be him and women want to bed him. But to achieve Riley’s status, you have to tread on a lot of toes and make a lot of enemies. When Riley is gunned down at the nightclub they own, Amy is determined to avenge his death. She receives a mysterious letter detailing a list of suspects including Riley’s sworn enemy, actor Grant Wilson. But with an obsessive passion brewing between her and Grant and a dangerous assassin trailing her every move it would seem Amy has opened a deadly and tempting Pandora’s Box. In settling the score for her husband has Amy put herself into terrible danger? 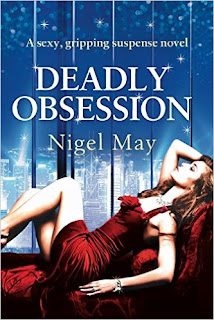 This is the second Nigel May book I've read and it is very different to the first one. In this one the violent death of a man in Manchester drives the story, so less of the usual glitzy glamour. I liked the way it moved from past to present and back again - and was easy to follow as the date was at the top of each new chapter. It helped to learn about everyone's past - none of which was as it appeared, apart from Amy.I loved they way she toughened up in her quest to find out what happened to her husband. And how his life was nothing as she expected!The ending was brilliant! Caught me out completely!I received an ARC from NetGalley and Bookouture in exchange for an honest review.