A quick review for a short story/novella set in Sydney, Australia. It's called A Kirribilli Christmas and is by Louise Reynolds. I've given it Four * - the reason is in the review.

Eight years ago Shelby left Sydney for LA, determined to set the world on fire. Now she's nearly broke and her boyfriend has left her alone at Christmas. Lonely and miserable, Shelby finds herself drawn back to the childhood home she thought she'd left behind . . .Frangipani House now belongs to Dan Sayers, the boy from the wrong side of the tracks who found a new start in Kirribilli. When he spots Shelby dragging her suitcase up the front steps on Christmas Eve, he can't believe his eyes. It's been four years since he last saw her. Then, she'd been aloof, a stranger in designer sunglasses and killer heels, barely acknowledging their shared past.As Christmas unfolds, Shelby and Dan grow closer than ever before and Shelby begins to see her ramshackle home in a new light. But before she and Dan can have any hope of a future together, they must first confront their past. 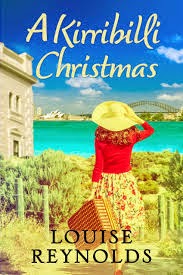 This is a short story/novella about Shelby and Dan. Given that it was necessarily truncated, I felt that the relationship didn't really have time to develop in this story. There were a lot of assumptions made and, despite what it says on the blurb, they didn't really confront their past. Every time Shelby faced an unpleasant truth, she just accepted it. People can't change a lifetime's way of thinking in 24 hours. For this reason I think it would have made a better full length novel. Then her view of the past would have time to change. A longer book would also allow the reader to see how her relationships with her foster brothers and sisters develop as they iron out their differences. What I did enjoy was reading about Sydney at Christmas. I lived there in the 70's and it brought back some happy memories :) And having said all that, I enjoyed the story - liked the characters (especially Dan) and would definitely read more of Louise Reynolds' books.