'It's Sister Dixon from the Royal Infirmary here. I'm sorry to tell you that Captain Hunt has been involved a serious incident.'

It's the start of the Easter holidays and Lauren Cusack should be heading back to Washington before her final term at Wyckham College, Oxford. But this call changes everything. Her relationship with impossibly handsome aristocrat Alexander Hunt has been turbulent, passionate and addictive. Lauren knows she needs to walk away, but as she now rushes to his side she knows she will be sucked back into his world.

And sure enough, Alexander - even a seriously injured Alexander - is an intoxicating cocktail Lauren cannot resist and despite everything that is sent to thwart them - and with Alexander there is drama at every turn - she finds herself happier than she's ever been.

But as her final term races by, and she is offered the perfect job back in Washington whilst Alexander is tied to his Estate, the impossibility of their romance hits home. 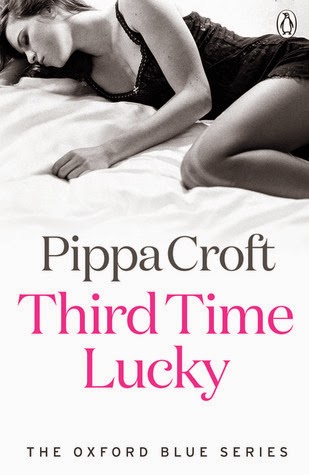 The Oxford Blue Series "concludes" in Third Time Lucky. You'll see the reason for the quotation marks at the end of the review.

Without giving too much away (which is difficult with this book), Alexander and Lauren's mutual addiction continues unabated. It seems that they can never have the Happy Ever After they want - he has the estate to look after so must remain in the UK. Lauren is handed a dream job in the US and so they have to part. I was in tears. We've been through so much with them both and the situation seems impossible. I couldn't stand the thought that Lauren would have to exist without him and vice versa.

The nasty byline characters get their comeuppance and I cheered loud and long! Loose ends get tidied up for the nice ones. Except, to a point, Alexander and Lauren. Without giving too much away, WE NEED A FOURTH BOOK! Hence the quotation marks earlier. There is more to this story and we need to mount a campaign to persuade Penguin Books to agree to a fourth book. I know the author will happily write it!

The best scene of the whole series for me is in Third Time Lucky. All I'll say is "swimming pool"......

So who is with me in the campaign?

You can buy the Kindle book and paperback at Amazon UK here: Third Time Lucky

And the paperback on Amazon US here: Third Time Lucky